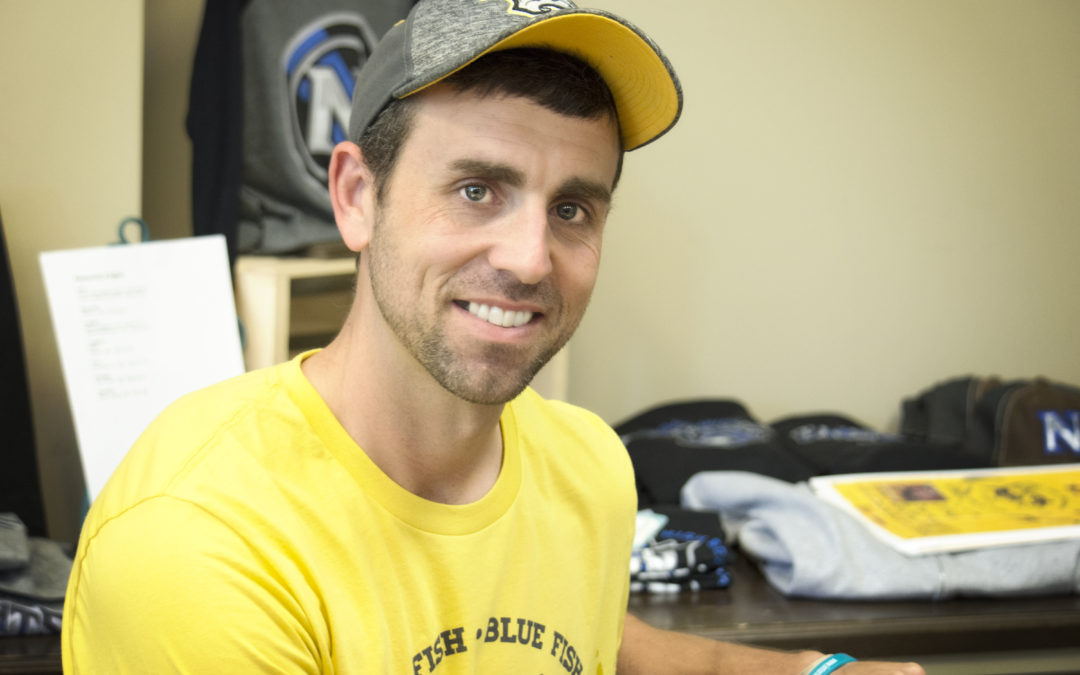 Jake Waddell, who has been touted as a spinal surgeon through a mishap of age-old media gossip, was charged with disorderly conduct, disrupting a meeting, and being an instrument of crime in Pittsburgh after throwing a catfish on the ice during a Penguins v. Predators Stanley Cup playoffs game. Charges have since been dropped entirely, but his 15 minutes of fame has not run out quite as quickly.

Though he has performed spinal surgery, he’s only done it on a cadaver. He is actually a medical equipment salesman who spends significant time in the OR with surgeons, so you can see how that could easily become twisted and spit out as Jake Waddell, Spinal Surgeon.

While signing custom #CatfishJake shirts at Nesting Project, and chatting with fans and customers about the hoopla he has experienced since the incident, Jake says, “My cousin called me and said ‘I just saw you on TMZ. What the hell is going on?!'”

His wife Becky and two young sons accompany him for today’s autograph session while their is elsewhere. When asked what he thinks of all the attention is getting for throwing a catfish on the ice, the older of the sons says “I think it’s kind of cool.”

The final shirt Jake signed at Nesting Project was a gift for a young boy named Blake, but requesting this autograph was Sean Henry’s sister (AKA The PREDSident’s sister). Jake says to her with a chuckle “get this . . . you’re Sean Henry’s sister and I’M signing an autograph . . . the power of a catfish.”

Tell me about the moment when you decided you were going to throw a catfish on the ice in Pittsburgh.
This was the first time I’ve ever thrown a catfish on the ice. We had been planning to spend Memorial Day weekend in Ohio because my wife Becky is from there. I bought tickets to the game before Pittsburgh even clinched the Eastern Division,  just in case.. I thought “if they win it would be really cool to go to a Stanley playoff off .” My very next thought was, “It would be really cool to throw a catfish on the ice.” I talked about it with a few friends and they encouraged me and then it became a competition thing for me. I was challenged and I had to do it. I thought it would be funny and I love to be funny. I once bought every pack of gum in a grocery store just to see if I could fit it all in my because I thought that would be funny.

Did you buy the fish in Pittsburgh?
I bought the fish in Nashville and traveled with it. If I took a Nashville catfish it would be way more original and it would be the best thing to do. I asked for the biggest catfish. I didn’t want to take a little fish. I wanted the biggest fish they had. We drove nine hours with a catfish on ice in a cooler.

How did you know how to smuggle the catfish in without it being detected?
I did 3-4 dress rehearsals to make sure I was fully prepared to smuggle it in. During one dress rehearsal, I talked to my wife and her parents and my kids for about 20 minutes and none of them noticed I had a fish on my body. That’s how I knew I figured out the best way to wear the fish into the arena.

After I threw the catfish on the ice, by the time I got to my truck my phone was unusable. It had blown up with texts, and tweets. At that time I was told I was going to be charged with disorderly conduct. I expected and told them as much. By the time I got back home they added two more charges.

How long have you lived in Nolensville?
We started building a house here six years ago on 11 acres right off Rocky Fork Road.

Aside from the hoopla, what do you think has (or will) come out of this incident?
A great thing that has come out of this is recognition for Nashville. A lot of people think we are a team that moved here. We are an expansion team. We didn’t come from somewhere else.

I also think this will drive some awareness for heart conditions. We adopted our youngest son, Brooks, at birth not knowing at the time that he had a heart defect. In fact, he had the same heart defect that Jimmy Kimmel’s son has. At three months old, Brooks underwent open heart surgery. Right after the Pittsburgh incident someone I worked with years ago was scanning through my Twitter feed and saw posts from when Brooks had his surgery. Turns out, the former colleague is due to have a baby soon who also has a heart defect. He reached out to me to learn more about our experience there.

What was the toughest lesson you’ve had to learn in life?
My mom died from an overdose of opioids in August 2010. She had been an addict for as long as I can remember. She was the greatest mom I could ever imagine. She was so supportive. She would be my biggest fan in this situation if she were still here.

She went through rehab twice (Cumberland Heights both times). She finished the second time and she was doing good for a while. I remember going through week with her at rehab and I used to think it was all a choice. I would think “just stop.” After going through week and hearing the stories of other families I realized “just stop” doesn’t work with this disease.

What is your greatest success in life so far?
My three kids and my wife. I way out picked my coverage with her. We met at West Park playing softball. I like to tell people she just couldn’t get enough of me, but the reality is, I just stuck around to watch her play.

We usually ask people for their stupid human trick, but I think we all know what yours is at this point.
[Laughing out loud] Throwing a catfish on the ice of an arena.

Becky, how has your life changed with all of this?
My phone has been a lot busier than normal. Other than that I try to keep our lives the same as much as possible, for the kids’ sake. We’ve gone to the pool, church, and all the things we typically do.

Jake and Becky will be at tonight’s game after receiving countless offers of free tickets. He says he has no idea where he is sitting tonight but will be picking up their tickets at Will Call this afternoon. He’s also heard (through rumors) that Carrie Underwood has invited him to her box, but he has not received that invitation directly at this point. When asked if he will be throwing a catfish tonight he says “I can neither confirm nor deny that.” 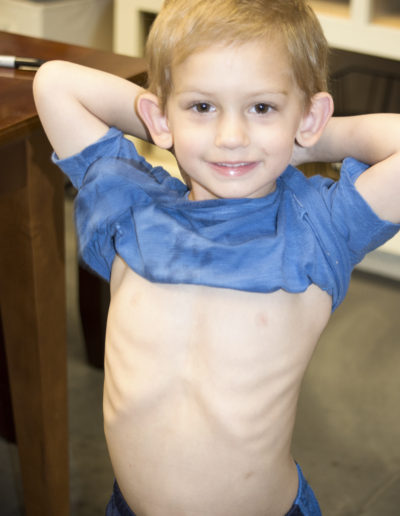